With thanks to Peter Bradford who wrote to us all the way from Maryland, USA to share his stories of adventure at Plas y Brenin.

In 1956, just before the completion of my final year in the Sixth Form at Dartford Grammar School (DGS), we had a visit from the contact at the local Central Council for Physical Recreation (CCPR).  My friend Brian and I became quite excited about a two-week course that was offered on mountain activities; hill-walking, rock-climbing, scrambling, and kayaking; at Plas-y-Brenin, the National Mountain Centre in North Wales.

I‘d had some experience of rock-climbing at Harrison Rocks near Tunbridge Wells in Kent, and the nearby High Rocks.  These were relatively simple climbs, but this experience, combined with an interest in climbing that I’d developed through reading the books of Tilman, Smythe, and Shipton; kindled in me a romance of mountains and climbing.

Incidentally, prior to that date, I don’t think I’d ever been higher than the North Downs at about 800 feet!  The crowning moment of my mountain-climbing fantasies was in 1953 when Edmund Hillary and Tenzing Norgay conquered Mount Everest for the very first time.

Just before my trip to North Wales I’d been on holiday in the Lake District with my parents.  So, a few days before the Plas-y-Brenin course, I left my family and hitchhiked down to North Wales; that in itself was an adventure.

When I crossed the border into Wales, having never been there before, I found myself overcome with an incredible feeling of coming home. I think the Welsh refer to this as ‘hiraeth'.

I’d acquired a vicarious love of Wales through my best friend at school, Bryn, and spent most of my free time in Wales. To this day, whenever I manage to get back to Britain, I’m drawn to spend time there. I always get a feeling of home coming and if offers a measure of healing – almost like a religious experience.

The Plas-y-Brenin course itself was quite an adventure for two suburban boys. The weather was typical of Wales; some beautiful, sunny days, some very wet and misty.  Brian and I had signed up for slightly different packages, so we were not together all the time, but we shared a lot of overlapping time, including kayaking and mountain walking.

I have so many fond memories of that course. To start with, I was privileged to rub shoulders with some of the greats of that era:  John Disley, Chris Bonnington, Chris Chataway, and Chris Brasher.  And on my first time in a kayak, I ended up taking a bath in Llynau Mymbyr, thanks to messing up a racing turn.

What I remember most of all is our last day, and night, when a group of us walked high into the hills above Cwm Idwal and camped overnight - in what proved to be the wettest, windiest night of our two-week adventure.

There were eight people in our group, seven students and an instructor.  It had rained all day, but we finally reached our campsite.  We made camp; the instructor sleeping in his own tent, and the rest of us settled down for the night in tents of various quality.

Through the luck of the draw, Brian and I had been issued with a two-man Meade.  This had been developed just a few years earlier and was made from nylon/cotton material. It was novel at the time, and it boasted a sewn-in groundsheet, and a flysheet.

The two-man Meade was used by the first successful Everest expedition in 1953, having previously been tested in the wind tunnel at RAE Farnborough, where at wind speeds of one hundred miles per hour, it was found to allow zero wind or water penetration.  Perfect for the weather we had that night in North Wales!

Needless to say, the other students fared less well than we did.  One group of three had a slightly larger tent, but it had a single-skin with no sewn-in groundsheet. I seem to remember that they became waterlogged in a matter of minutes.

A married couple in the group had an older Meade tent of an earlier design, with a groundsheet sewn in as an afterthought, which didn’t have a fly-sheet. They lasted a little longer, but water began to penetrate the sides, and the groundsheet became only moderately effective. It served largely to keep most of that water from leaving the tent.

So with the instructor snoring his head off in isolation in his efficient tent, Brian and I ended up playing host to five cold, bedraggled visitors. All seven of us managed to get a reasonable night’s rest in a tent designed for just two people.

That was a night none of us will forget. Full credit to the manufacturers of the Meade, which far exceeded its design parameters.

The photo Peter has shared is of “Yours truly, aka, the less than Magnificent 7".

Thanks Peter. A great story.

Guess who the contact was from the Central Council for Physical Recreation, who signed up Brian and Peter for the course at Plas y Brenin?

It was Basil “Joe” Jagger, a local physical training instructor. Peters says Joe looked more like a bank manager than a PT instructor, but he knew his stuff. As it happened, Joe’s son also attended Dartford Grammar School. His name was Michael Jagger. None other than Mick Jagger!

However, Peter’s keen to point out that it was Joe who had the outstanding impact on his life; and on his friend Brian’s. Not Mick, his son.

And as it turns out, Peter is one quarter Welsh. His mum reveal this to him at the age of 18, after which his ‘hiraeth’ emotional reaction upon his visits to Wales, made complete sense.

Plas y Brenin, providing opportunities and adventure back then, as we do today. Welcoming people from across all spectrums of life and location, from the beginners to the experts. Sowing the seeds of inspiration and developing hobbies and achievement. Creating fond memories and enabling adventurers to live out the experiences of their idols.

Plas y Brenin. Where anything is possible. 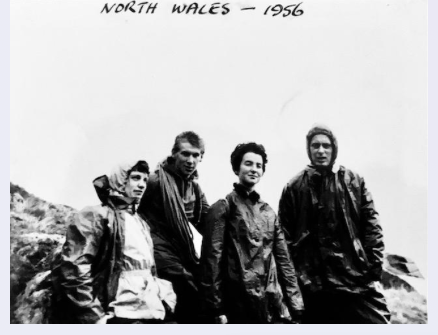 FOND MEMORIES OF A TRIP TO PLAS Y BRENIN IN 1956

Peter Bradford wrote to us from Maryland, USA to share with us his memories of a defining trip to Plas y Brenin, when he rubbed shoulders with his now idols, developed a love for outdoor adventure and learnt that he was himself, one quarter Welsh.